Further to Section 1 below, as of 10 March 2020, Bracknell Forest Council have Published a Summary of Responses to their Consultation on their Revised Growth Strategy.  This includes Objections to the Syngenta Jeallot's Hill Proposal.  The parts that refer to the Jealotts Hill proposal have been abstracted by me and are available at the buttons below.  The main part extends to 60 pages.  The second - an appendix - is one page.

I also include a commentary (Press Release) by the Jealott's Hill Group.

We have advised members in November 2019 about the Bracknell Forest Council's plans to build a new 4000 home village at Jealott's Hill.  We are much concerned about traffic that could come from there.

The Jealott's Hill proposal is one of several proposed developments which would increase through traffic in the area around M4 J 8/9 out to a 2 km radius.

Even without the Jealott's Hill proposal the A330 through Holyport, and the Holyport Road from the A330 to the A308 have to accept existing traffic from the countryside heading to and from M4 J 8/9.  The A308 is also badly affected.

Also countryside residents wishing to go by rail have first to drive to Maidenhead station.

Lodge Farm, Holyport may yet be developed.  Houses have been proposed next to the Thames Hospice.  The Thames Hospice itself will increase traffic.  The RBWM Local Development Plan will create further homes in Maidenhead, including on the Golf Course and the area to the South West of that.

4000 new homes at Jealott's Hill would no doubt result in a great number of people wishing to access the M4 at J 8/9.

It is not acceptable that Central Government should be forcing Local Authorities to build more and more houses without paying any heed to the need for extensive improvements to transport infrastructure.

It is long past time when a new motorway junction should have been created on the M4 between J 8/9 and J 10.

Due to the increase in traffic that it would produce, a development such as is proposed by Bracknell Council is unacceptable without such a new motorway junction.

M4 J 8/9 and J7 have no southerly exit, forcing a significant volume of south bound local traffic, and northbound motorway traffic through local junctions. Braywick roundabout near J 8/9 at the end of the A308(M) is a classic example.

Money is being spent to convert the M4 to a so-called Smart Motorway - the whole concept of which has been discredited due to deaths attributed to lack of safe areas to stop - yet no thoughts given to new M4 access junctions.

In light of the RBWM Local Development Plan proposals for housing and therefore increased population, Government should also consider the benefits of creating a new railway station in the vicinity of the White Waltham Airfield. The distance between Maidenhead and Twyford stations is the largest in the section between Reading and Paddington. These developments and a new Motorway Junction would reduce the traffic on the A308 and A330 travelling to and from Maidenhead.

There are other reasons to reject the Jealott's Hill proposals - environmental - inappropriate development in Green Belt - no special circumstances - through Bracknell Forest's other plans they already meet Government housing requirements.

Comment sent to Bracknell Council, responding to their consultation as follows;

I write to comment on a particular part of your plan, the part attached describing your housing etc proposals at Jealott's Hill.

I am a resident near Holyport whose roads - the A330 and Holyport Road - are already overloaded, due partly to traffic already coming or going to or from the M4 at J 8/9, and originating from, returning to areas such as the one you propose to develop.

By adding 4000 homes in that area you will undoubtedly add to the traffic transiting our area.

I find it unacceptable that you should propose to build this new village on Greenbelt land with no apparent regard for the effect on the congestion, pollution and inconvenience it will impose upon the transport infrastructure in the area of M4 J 8/9 and its existing users and local residents.  This is infrastructure and a residential area for which your council has no responsibility, but upon which you intend to impose your traffic.

I therefore object in the strongest possible terms to your proposals.

One thing that might help would be if you could arrange for a new M4 Motorway junction between the existing M4 J 8/9 and J 10, with appropriate feeder roads South and North perhaps as shown on the map copy I attach.

Without such a junction any development such as you propose is totally unacceptable.

I write with approval of the Holyport Residents Association Committee, on behalf of local residents.

Anyone wishing to comment see below screenshot which can be accessed from following link;

You can then write to development.plan@bracknell-forest.gov.uk in a similar way as I have done - or you can just write to say you support my comments.

Below see a map from the Bracknell Forest Council webite showing the area proposed to be developed.

Below see a map showing my proposal for a new Motorway Junction.  This was not drawn up for the current proposal - I have suggested it to Government in the past with no success. 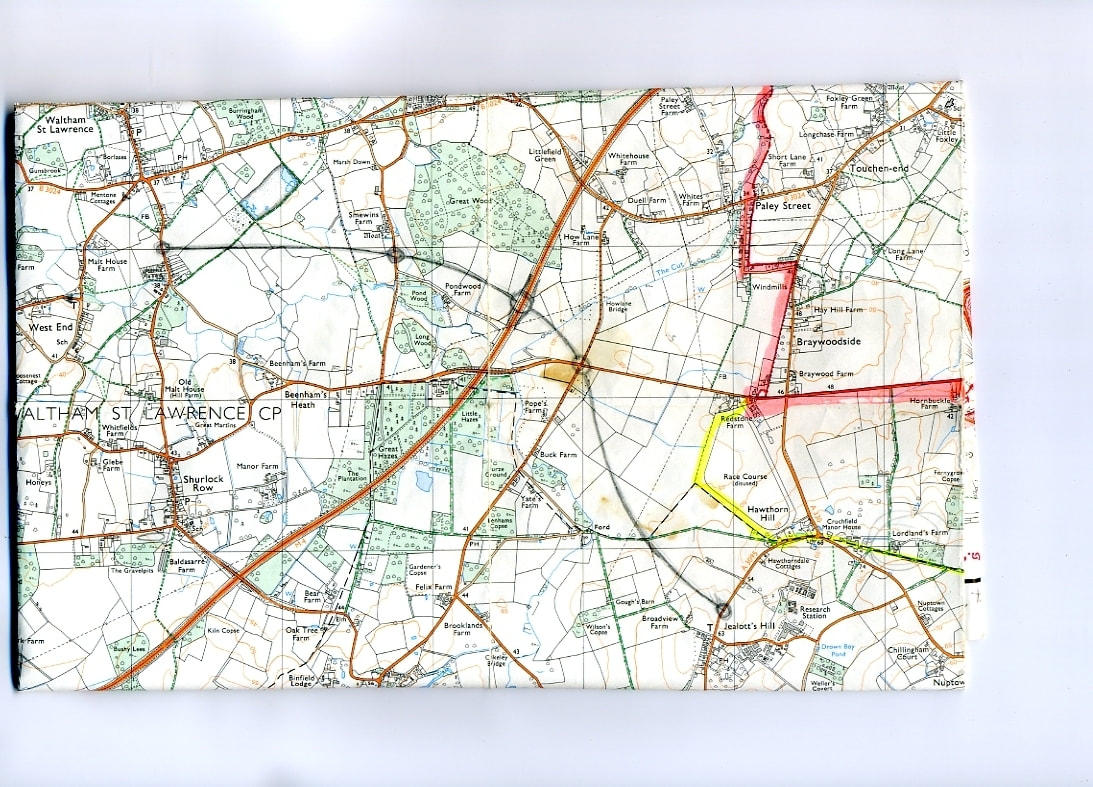